Difficulty: ☠☠ (There is a catch though)
Rating: ✫✫✫ (I would give it 4 stars if your proficiency is higher_

So about a week or two ago, Duolingo (finally) released a Japanese module. Seeing as today I received an e-mail announcing it’s official release, I figured it was only fair that I write review on it now.

For those who don’t know, Duolingo is a free app which attempts to teach users a language through repetition of vocabulary and basic sentence structure. Each subject (sports, weather, family, etc) are a different module. Each module has several lessons. Each lesson has about a dozen questions (I believe some are shorter or longer than others). As you complete modules you unlock the ability to study further modules. You also gain XP and occasionally gems which can be used to buy convenience and aesthetic options from the shop. Once you complete a module, it is “At full strength” with five full bars. As the days pass, the bars begin to go down, encouraging you to redo the lessons before you forget what you learned. The speed at which the bars degrade is to some extent determined by how many mistakes you made while doing the tests.

At the time of writing this review, I am on a 12 day streak, have completed 23.8 modules and am about level 8 or 9 (not really certain where to check that…)

I want to point out, that at the time of writing this review, Duolingo Japanese is still VERY new and as such it would be unfair to act like this is all the app will ever be. However, AT THIS POINT, I would say that Duolingo Japanese is effective, but only if you have a decent grasp on the Japanese language already and DEFINITELY not to be used on it’s own.

While the app is INCREDIBLY simple and honestly you learn things without realizing you are learning it, I worry that the numerous false pronunciations, and more importantly, textbook case Japanese will create some bad habits for new Japanese learners which will be hard for them to break later on.

Again I hope that they polish these bugs out as time goes on as this IS an app I think holds a lot of potential, though maybe not quite ready for a language as complicated as Japanese yet. If you are a new user and still really want to use it, the more power to you! I think it’s great for seeing how sentence structure works in practice. BUT I really strongly suggest getting another Japanese grammar textbook to read on the side. It will save you a lot of pain in the future. (Read through this blog to find a number of textbooks and resources I recommend!) 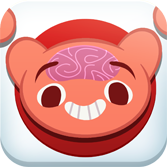 As far as language game apps go, this apple app is my favourite. It has a very childish aesthetic yet is also surprisingly polished, and has multiple methods for helping to increase your vocab (an area I struggle with)

The app gives vocab packs (body parts, dates, food, etc) and you attempt to level up by “Mastering the words” in said packs. Most of the games are fast paced and rarely last longer than a minute which makes it surprisingly addicting. (though they would last indefinitely if I was better at them) My personal favourite is the game with a goldfish who will continue to have the water drained out of his bowl unless you guess the right word. As you get more right answers you start having to react faster. Somehow I find this one the most addicting game, though they are all pretty good.

My one qualm with the app is that I find you progress a little too quickly, and have no way (that I’ve seen) to “undo” your progress. I would like to spend a bit more time locking certain packs to memory… or maybe even ease myself back into it when I’ve left the game for a while.

HelloTalk is an app which lets you chat directly with native speakers of whatever language you want to learn. The translate tools are surprisingly useful having both translate and transpose in case you still want to attempt the Japanese but are stuck on the kanji.

Much like Lang8, HelloTalk allows users to correct each others’ messages line for line, though it can be a touch glitchy.

If you are a basic member you will have a daily translate limit, but that disappears if you become premium. On top of this, they have recently added a section similar to twitter where you can write posts which will be shown by everyone who speaks the language you want to learn. This is a far more effective method for finding people than the original search feature and also lets you have some casual chats with strangers.

With the ability to chat, leave messages, leave audio messages, send pictures, and audio call each other, it is an app with many useful tools. I cannot speak for the English community, but almost everyone I have met on that app so far has been helpful and fun to talk to. I will leave a slight warning though NOT to talk to anyone who says hi but isn’t from the language you have selected as what you are interested in. They pop up from time to time somehow and in my case at least, have almost always ended badly making me think they are probably troll accounts.

My main complaint about the app would have to be the way chat history is saved. Instead of saving your chat history to a cloud network such as what facebook messenger would do, it instead saves your chats directly to your device. This is a bad idea for two reasons.

1) this means that you can only be logged in to one device at a time, which is hard for people like me who use their phones for notifications and tablet for messaging. It also means that if you are not near your commonly used device, you cannot simply switch over to continue your conversation as your past messages are only on one device

2) It fills up your device’s memory after a while!

Learning a language is hard no matter who you are. this is something I’ve learned especially after the last 3 years of self studying Japanese. The following is a collection of the various Japanese textbooks and resources I have read, how easy they were to use, and how much I recommend them. がんばってねみな！